The caption I sent to National Geographic:

Often described as 'older than tradition itself', Varanasi (India) is one of the most ancient living cities on earth. Ageless, it doesn't seem as if the passage of time has transformed it in any tangible way.

Under the abiding auspices of the goddess Ganga whose waters wash its shores, Varanasi is the holiest city in India. Hindus believe that bathing in the Ganges absolves them of their sins, and that having their body committed to it at death liberates their soul from the cycle of transmigratory rebirth.

Its ghats - steps leading to the river - are a hub of social cohesion where life and death intermingle. Men wash clothes, youngsters play, their elders exchange gossip, shopkeepers display their wares, priests perform elaborate rituals for the public while, remote from the bustle, pilgrims and holy men silently bask in the river, their spirit immersed in the goddess. Downstream, the 'burning ghats' greet an unceasing procession of the deceased and submit them to a final purification by fire and water.Their bodies are cremated and their charred remains entrusted to the river.

'Pure souls' - priests, pregnant women, small children, lepers, and victims of snake-bites - are not cremated. Their bodies are swathed in a shroud and taken to the deep of the river, where they are dropped to their final resting place, a heavy stone attached to their feet.

At dawn, a veil of mysticism covers Varanasi. A lone pilgrim wades in the holy waters, absorbed in a timeless ritual of purification. Nearby, boatmen prepare to commend a 'pure soul' to the depths of the river. 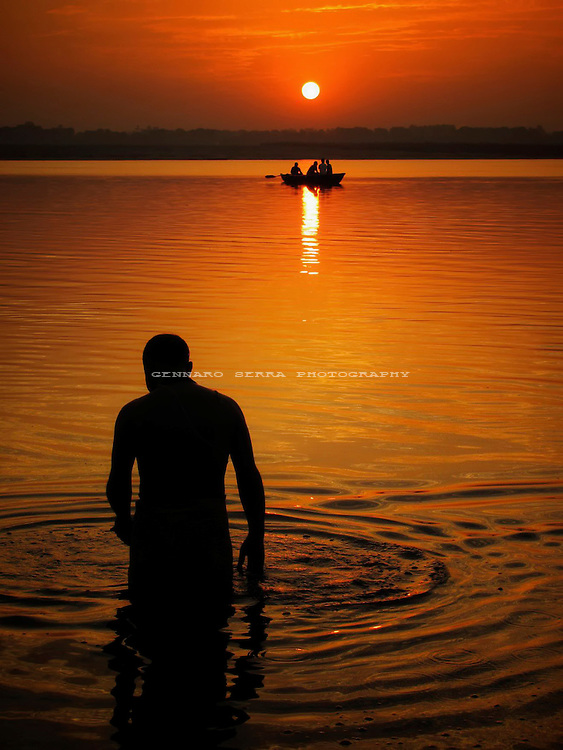